This article departs from the post 2008 financial crisis context, from its intersection with technological developments, and from the socio-technical arrangements configured by this conjuncture. It explores plans and actions – of mainstream financial institutions, and of a community seeking for alternatives to centralised economy and governance – for the use of digital platforms supported by blockchain infrastructure. In particular, it explores how such plans and actions relate to conceptions of public and peer trust and how they appear to produce, or reinforce, reputational imaginaries and quantification practices within added value philosophies. By illuminating a tension between the two identified case examples, I seek to render alternative communities’ and financial institutions’ conceptions, imaginaries and practices (more) visible and to analyse their organisational marketing strategies – where there is a pragmatic and discursive operationalisation of technology as well as of trust as means to gain more self-sovereignty in action, while navigating markets and regulated actual world contexts.

Imagine meeting a stranger and entering into a trusted economic exchange without needing a third party to vouch for you. What changes in your theoretical perspective in such a world? That model of interaction is what distributed trust technologies such as blockchain bring. I introduce the basic concept of distributed trust, describe some early instances, and highlight how organizational theories need to be updated to no longer rely upon fundamental assumptions about trust which are becoming outdated. Distributed trust fundamentally transforms boundaries of organizations and challenges assumptions about internalizing organizational functions to overcome market trust coordination issues. Implicit assumptions about the legitimacy and power of central network positions no longer ring true. This is very fertile ground for organizations research as the core tenet of the field—what roles and functions should group together within an organization—is being called into question at the most fundamental 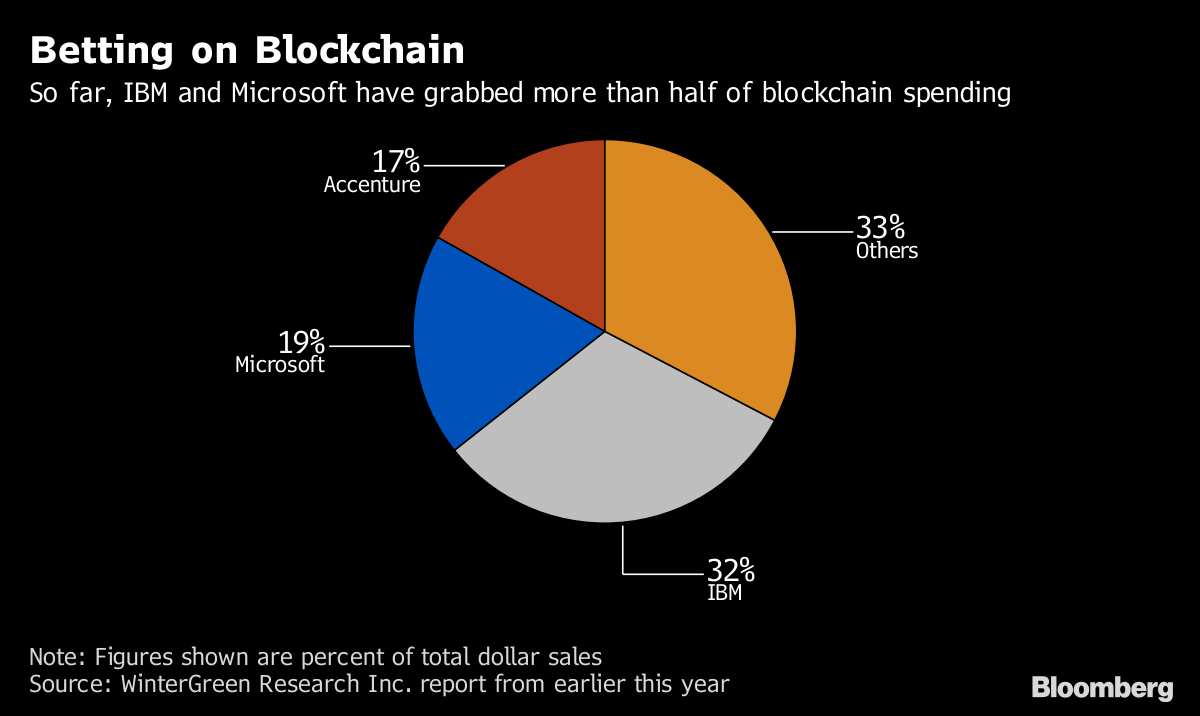 Corporate America’s love affair with all things blockchain may be cooling.A number of software projects based on the distributed ledger technology will be wound down this year, according toForrester Research Inc. And some companies pushing ahead with pilot tests are scaling back their ambitions and timelines. In 90 percent of cases, the experiments will never become part of a company’s operations, the firm estimates.Even Nasdaq Inc., a high-profile champion of blockchain and cryptocurrencies, hasn’t moved as quickly as hoped. The exchange operator, which talked in 2016 about deploying blockchain for voting in shareholder meetings and private-company stock issuance, isn’t using the technology in any widely deployed projects yet.“The expectation was we’d quickly find use cases,” Magnus Haglind, Nasdaq’s senior vice president and head of product management for market technology, said in an interview. “But introducing new technologies requires broad collaboration with industry participants, and it all takes time.”Betting on BlockchainSo far, IBM and Microsoft have grabbed more than half of blockchain spendingSource: WinterGreen Research Inc. report from earlier this yearNote: Figures shown are percent of total dollar salesBlockchain is designed to provide a tamper-proof digital ledger — a groundbreaking means of tracking products, payments and customers. But the much-ballyhooed technology has proven difficult to adopt in real-life situations. As companies try to ramp up projects across their businesses, they’re hitting problems with performance, oversight and operations.Hype Versus Reality“The disconnect between the hype and the reality is significant — I’ve never seen anything like it,” said Rajesh Kandaswamy, an analyst at Gartner Inc. “In terms of actual production use, it’s very rare.”That could be bad news for makers of blockchain software and services, which include International Business Machines Corp. and Microsoft Corp. They’re aiming to make billions on cloud services that help run supply chains, send and receive payments, and interact with customers. Now their projections — and investors’ expectations — may need to be tempered.“Blockchain is supposed to be an important future revenue stream for IBM, Microsoft and others in equipment sales, cloud services and consulting,” said Roger Kay, president of Endpoint Technologies Associates. “If it materializes more slowly, analysts will have to make downward revisions.”IBM, which has more than 1,500 employees working on blockchain, said it’s still seeing strong demand. But growing competition could affect how much it can charge clients, according to Jerry Cuomo, vice president of blockchain technologies at IBM.Microsoft also remains upbeat. “We see tremendous momentum and progress in the enterprise blockchain marketplace,” the company said in a statement. “We remain committed to developing cutting-edge technology and working side-by-side with industry leaders to ensure business of all types realize this value.”So far, IBM and Microsoft have grabbed 51 percent of the more than $700 million market for blockchain products and services, WinterGreen Research Inc. estimated earlier this year.For a large swath of companies, blockchain remains an exotic fruit. Only 1 percent of chief information officers said they had any kind of blockchain adoption in their organizations, and only 8 percent said they were in short-term planning or active experimentation with the technology, according to a Gartner study. Nearly 80 percent of CIOs said they had no interest in the technology.‘No Delay’Many companies that previously announced blockchain rollouts have changed plans. ASX Ltd., which operates Australia’s primary national stock exchange, now expects to have a blockchain-based clearing and settlement system at the end of 2020 or the beginning of 2021. Two years ago, the company was aiming for a commercial blockchain platform within 18 months. An exchange spokesman said “there’s been no delay,” as the company hadn’t announced the exact launch date until recently.Another early advocate, Australian mining giant BHP Billiton Ltd., said in 2016 that it would deploy blockchain to track rock and fluid samples in early 2017. But it currently doesn’t “have a blockchain project/experiment in progress,” according to spokeswoman Judy Dane.But there could be more of an uptick next year, according to blockchain-backing organizations.“It’s not on a steep ramp-up curve at all,” said Ron Resnick, executive director of Enterprise Ethereum Alliance, comprised of about 600 members such as Cisco Systems Inc., Intel Corp. and JPMorgan Chase & Co. “I don’t expect that to happen this year. They are still testing the waters.”Seeking StandardsOne reason behind the delays: Most blockchain vendors don’t offer compatible software. Companies are worried about being beholden to one vendor — an issue the EEA group hopes to resolve by setting standards.The organization will launch its certification te

Blockchain is not only crappy technology but a bad vision for the future. Its failure to achieve adoption to date is because systems built on trust, norms, and institutions inherently function better than the type of no-need-for-trusted-parties systems blockchain envisions. That’s permanent: no matter how much blockchain improves it is still headed in the wrong direction.

You actually see it over and over again. Blockchain systems are supposed to be more trustworthy, but in fact they are the least trustworthy systems in the world. Today, in less than a decade, three successive top bitcoin exchangeshave been hacked, another is accused of insider trading, the demonstration-project DAO smart contract got drained, crypto price swings are ten times those of the world’s most mismanaged currencies, and bitcoin, the “killer app” of crypto transparency, is almost certainly artificially propped up by faketransactions involving billions of literally imaginary dollars.

This paper outlines how the digital currency and network technology of bitcoin functions and explores the context from which it emerged. Bitcoin was conceived in 2008 as an attempt to alleviate trust in government and banks which was at a low during this period of financial crisis. However, with bitcoin trust does not dissipate, rather it shifts. Trust moves from trust in banks or states to trust in algorithms and encryption software. There is a move from conventional trust in the gold standard—“In Gold We Trust”—to the trust announced on U.S. currency—“In God We Trust”—to trust in software and networks—“In Digital We Trust”. The hyperbole of bitcoin discourse is deemed to be an expression of the Californian Ideology, which itself often conceals a right-wing agenda. The paper analyses the hype behind the celebration of decentralised digital networks. It proposes that a form of network fetishism operates here. The failure of bitcoin as a currency (rather than as a hoarded commodity in an emergent bubble) and as an idea might be attributed to the failure to see how ultra-modern digital networks conceal very traditional consolidation of power and capital. The rise and fall of bitcoin, in terms of its original ambition, serves as a cautionary tale in the digital age—it reveals how ingenious innovations that might challenge power and the consolidation of capital become co-opted and colonised by capital. Finally, the paper offers a discussion of the possible progressive uses of the digital technology bitcoin has facilitated.

Permission-less blockchains can realise trustless trust, albeit at the cost of limiting the complexity of computation tasks. To explain the implications for scalability, we have implemented a trust model for smart contracts, described as agents in an open multi-agent system. Agent intentions are not necessarily known and autonomous agents have to be able to make decisions under risk. The ramifications of these general conditions for scalability are analysed for Ethereum and then generalised to other current and future platforms.